ZombieFunNearYou.org - Find a Zombie paintball, Zombie walks, and Zombie events near you! 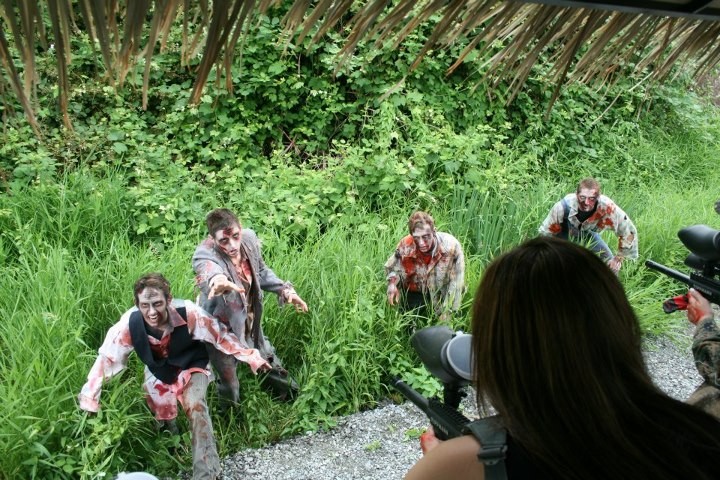 Zombie paintball is appearing at more and more corn mazes, pumpkin patches and other Fall farm venues.  Following on the popularity of anything having to do with zombies (remember how the Canadian government even had a zombie apocalypse preparedness day?) many Halloween attractions, particularly those on farms, are having a new event called "zombie paintball".

The concept is pretty simple: typically, patrons pay a fee to be given a loaded paintball gun which is mounted on either a haywagon (which drives through the zombie field) or on a ledge (like at a shooting range) and they fire away at zombies (actors dressed to look like zombies, whose clothes and masks protect them from injury).

So, just like in Shaun of the Dead, you get to fire away at zombies staggering around, trying to reach you and eat your brains!

How to find a zombie paint ball venue?

We are continually updating and adding to our list of zombie paintball locations, farms and corn mazes that offer zombie paintball hayrides, zombie paintball trails, zombie lasertag, and indoor facilities, which is growing every day, right here, alphabetically, by state and county. Just click on your state here (and if you know of any we haven't got, write us!): 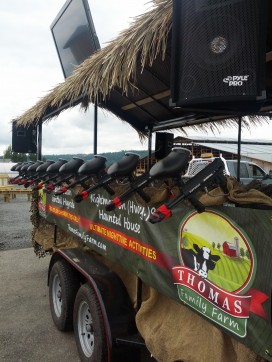 Looking for Haunted houses and other scary venues?

If hunting zombies with a paintball gun or lasertag isn't your thing, but you like being scared look below for a haunted house (and if there are none on this page; recommend one!)

And for traditional Halloween kid-friendly fun:

We have loads of related resources here, too.